Is Masonry a religion.?
No
Not a religion
But a man must have faith
A Mason’s trust is in his God.

He first came to the Lodge
Was asked to kneel…
A Brother prayed for him.
Another walked with him,
Never alone –
Always upright like the Plumb
Trusting in the Brother and his God.

He walked a path others had walked.
For centuries every Mason has walked that path -- learning and growing
Trusting his Brothers and his God.

Progress brought light, more light and further light.
The light from God “In the beginning.”
The light of learning and knowledge.
Light from the God in whom he put his trust.

The Mason grew as he made his promises.
Secrets to keep – Secrets to look for.
The Master’s Word was lost.
Searched for and never found.
But still he could trust in his God.

Working tools taught him lessons
A good man was made better.
Passions were subdued and the tools helped him build.
Build his character as a stone
Whose rough edges are smoothed
For the Temple of His God.

“Behold how good and how pleasant it is for brethren to dwell together in Unity” The Mason prayed that discordant passions be subdued,
That Brotherly Love and Affection be spread with the Master’s trowel.
And God is the one he trusts to answer that prayer.

And so may the blessing of Heaven
Rest upon all Masons. May we meet upon the level and part upon the square always trusting in our God.

Not a religion
But a man must have faith
A Mason’s trust and his faith
are in his God.

Jay Cole Simser
March 22. 2004
Inspired by M.W. Brother Tom Eggleston
Dedicated to R.W. Bill Yungclas
Tom Eggleston, PGM is one of my Masonic Heroes.  When I decided to write a tribute to Brother Bill as he became Grand Chaplain I thought of Tom and he was the inspiration for this.
Posted by jaycoles@gmail.com at 7:55 AM 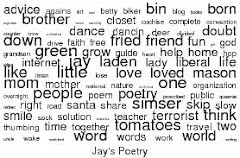