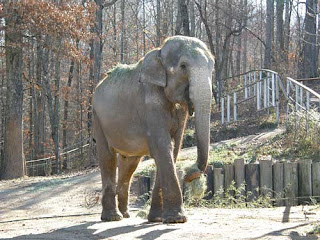 For today's prompt, I want you to pick an animal; make that animal the title of your poem; then, write a poem. You could be very general with your animal title ("Bees" or "Lion") or specific ("Flipper" or "Lassie"). You could even be very silly with something like "Tony, the Tiger," I guess (that tiger on the cereal box).


Ned
Ned stood in the door of his Semi-trailer
An elephant
You would not think that he would be timid
But he had lived a horrible life
An elephant
Nature’s most majestic animal
He should be living large
Proud with a gentle bearing
But not Ned
Ned is frightened
He sways from side to side
peering out timidly.
He has been a long time in a bad place
That would frighten even the bravest animal
Ned doesn’t like to eat.
He is skin and bones
Slowly, slowly he moves forward
Swaying from side to side.
Tentative
gaining a little confidence with each step.
Soon he is inside his new “place”
People help and love him
They want him to recover from what others have done to him.
I found him on the Internets
I pray for him
I want him to live a long life
in love
with friends
gaining each day
Blessing the earth with his presence
Go Ned!
Posted by jaycoles@gmail.com at 5:19 PM

Labels: A Poem A Day

You captured the plight of the circus elephant so well.